The Czech News Agency (ČTK) has made news from the Ukrainian news agency Ukrinform available in Czech on its website ceskenoviny.cz (ČN).

ČN thus has two language versions of Ukrinform's news coverage. First, the ČTK provided the Ukrainian agency’s news service in Ukrainian, and now it also offers automatic translations of the agency's news from its English service into Czech into Czech. 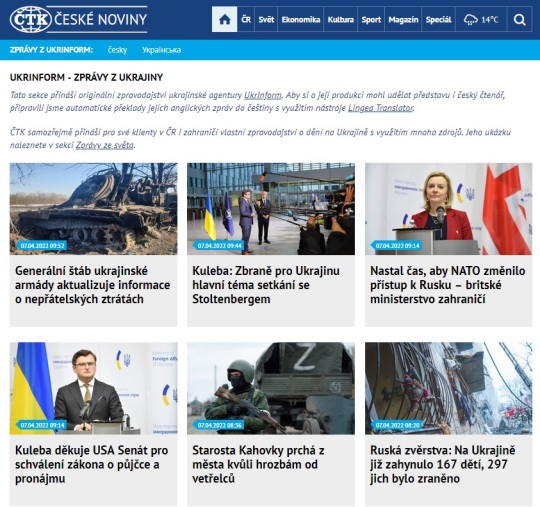 The Ukrinform section in Czech presents original news coverage of the Ukrainian agency so that Czech readers can have an idea about its production. The ČTK’s IT department has prepared automatic translations of Ukrinform’s English news into Czech using the Lingea Translator tool.

The ČTK also offers its clients both in the Czech Republic and abroad its own coverage of events in Ukraine, drawing from a range of sources from around the world. A sample of this news coverage can be found on the ceskenoviny.cz website, in the Zprávy ze světa (World News) section, which is well known to media clients. A special offer can be found, for example, here: ČTK offers special news coverage on war in Ukraine.

From the beginning of the war on February 24 to the end of March, the ČTK published almost 7,000 stories with the keyword Ukraine and more than 100,000 photographs (taken by ČTK photographers as well as by foreign agencies, including Ukrinform).

The news portal Ceskenoviny.cz publishes only part of the ČTK’s production (about 15 percent of the total number of all stories published). Traffic on the website has increased by as much as 200 percent since the start of the war. The conflict in Ukraine and the related migration crisis are currently the main topics on the site.

Ceskenoviny.cz ranks among the most visited news websites in Czechia.