The ČTK has been offering its clients extra services for free since the beginning of the conflict in Ukraine. On Thursday, February 24, it also made its news service available free of charge to the Ukrainian national news agency Ukrinform. In the first five days of the conflict, from Febraury 24 to 28, the ČTK published more than 1,500 news items (including flashes and versions), more than 700 headlines and 60 profiles with the keyword Ukraine. 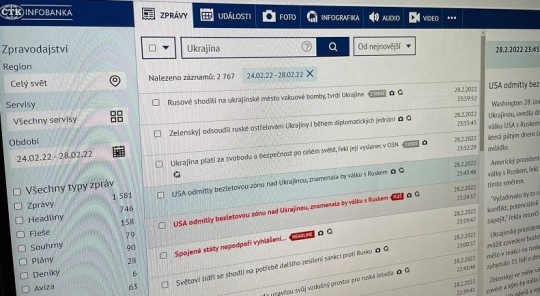 "We have made online transmission available to media clients, delivering them the fastest breaking news, which are made from the released headlines. At present, it runs on about 40 web portals in the Czech Republic and Slovakia," said Jan Vavrušák, the ČTK’s deputy sales director.

"We have also offered clients the possibility of sending the fastest news on Ukraine, i.e. the headlines I have mentioned, directly to their emails. This service is also in great demand among our subscribers. In addition to the media, deputies and senators of the Parliament of the Czech Republic have shown interest in it," Vavrušák added. The Foreign Ministry, too, has had the fastest news service sent via text messages to a wide range of its senior staff since the outbreak of war in Ukraine. 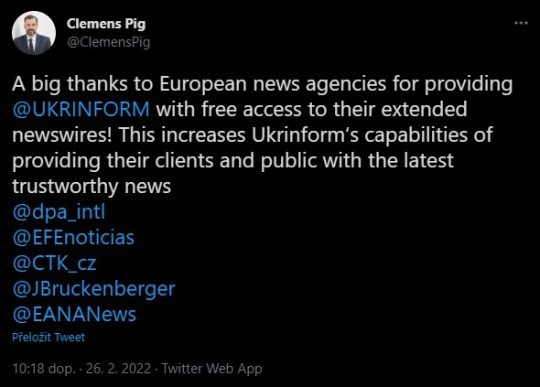 Most of the news on Ukraine is issued at the ČTK’s foreign desk and a large part also at the domestic desk, but the impacts of the conflict are also covered in detail at the economic and sports desks.