People can see the photographs of successful Czech Olympic athletes from Tokyo as well as their predecessors, winners from the previous Olympic Games, in the centre of Šumperk. The outdoor photographic exhibition at a pedestrian zone offers 152 large-scale photographs, including this year’s successes of shooters Jiří Lipták and David Kostelecký and the gains of gold medals by heavyweight judoka Lukáš Krpálek and canoeist Jiří Prskavec. The Olympic Moments exhibition, opened in Šumperk by the Czech News Agency (ČTK), will run through November 18. 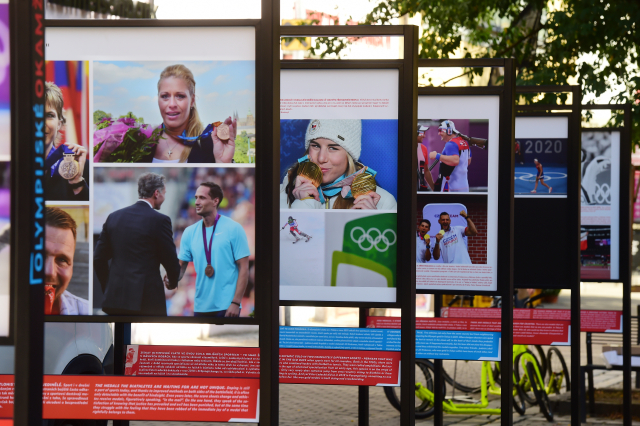 The display was premiered in Uherské Hradiště in August, while the latest pictures from the Tokyo Summer Olympics were added to it in Šumperk. "We intended to update the exhibition after Tokyo. But it is eventually more extensive than it would ever cross our minds when we were closing the premiered version before the Olympics. This year’s medal harvest of the Czech team was unprecedented, and this is why we have modified one quarter of the exhibition space eventually," said its co-author and the former long-term head of the ČTK sport desk, Ladislav Josef. 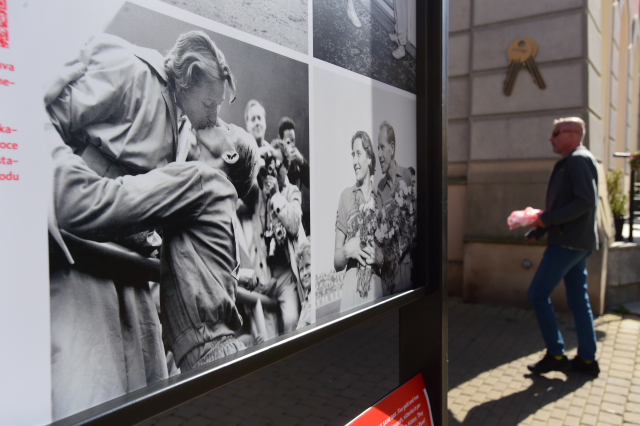 The panels with Olympic villages and fans that were part of the premiered version were replaced with “golden chaps from Tokyo” in the Šumperk version, referring to the successes of shooters Jiří Lipták and David Kostelecký and the almost parallel victory of gold medals by judoka Lukáš Krpálek and canoeist Jiří Prskavec. They became friends at the Olympics in Rio de Janeiro in 2016, and this year, they won gold medals on the same day within two hours.

"We have also updated the panels on individual sport disciplines, for instance, tennis, canoeing and weightlifting. The panel focusing on the work of reporters at the Olympics, which was affected by the COVID pandemic a lot, is also updated," said the ČTK Photo Bank editor-in-chief and one of the exhibition authors, Petr Mlch. 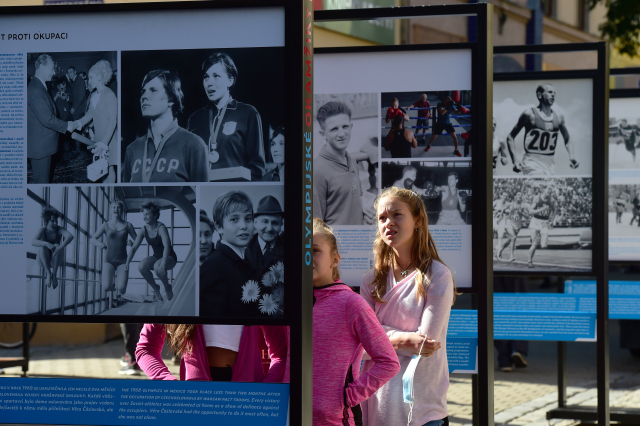 When strolling along the pedestrian zone, people can see the photographs of famous Olympic athletes with links to their town on the panels. A special panel is dedicated to seven-time Olympic winner Věra Čáslavská, who used to go to Šumperk as a gymnast in the national team for training workshops, and her local friends helped her find shelter in the Jeseníky mountains after the invasion of the Warsaw Pact troops in 1968. The exhibition could not skip the winning jump of the Šumperk-born freestyle skier Aleš Valenta in the aerials competition at the Olympics in Salt Lake City in 2002. The pictures also capture other famous or less known moments from the history of the Czech and Czechoslovak participation in the Summer and Winter Olympics. 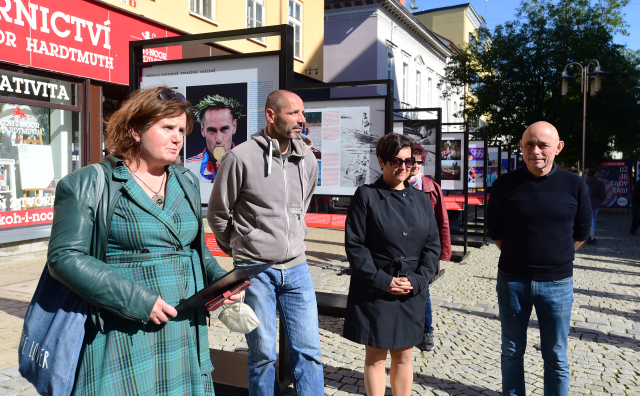 The exhibition authors attended its opening in Šumperk. On the right, there is former long-term head of the ČTK sport desk Ladislav Josef, ČTK news desk editor-in-chief Radka Matesová Marková and ČTK Photo Bank editor-in-chief Petr Mlch. The executive of the House of Culture in Šumperk, Hana Písková, stands on the left. (Photo: Luděk Peřina/ČTK, 2021)

As in the case of the ČTK previous big photographic exhibitions, the pictures come mostly from the rich photo archive of the national news agency, but also from other sources. The Olympic Moments display freely follows up the ČTK outdoor exhibitions Moments of the Century, Moments of the Velvet Revolution and Undesirable Moments and like them, it will be accompanied by materials for schools as well. From Šumperk, the touring exhibition will move to Brno. Further stops will bet in the centre of Prague, in Vrchlabí, Kopřivnice and the Prague 4 district. The last stop will be traditionally the pedestrian zone near the Czech Photo Center in Prague-Nové Butovice.