The Czech News Agency (ČTK) has made a significant monetary donation to the Ukrainian national news agency Ukrinform. Since the February 24, the first day of the war in Ukraine, the ČTK has also provided its Ukrainian colleagues with free access to its news coverage. In addition, it has made Ukrinform's news service in Ukrainian available on its website ceskenoviny.cz and is preparing its translation into Czech.

In the three weeks of the war, from February to March 17, the ČTK published more than 5,000 news stories (including flashes and versions), more than 2,100 headlines and almost 200 profiles with the keyword Ukraine. This is significantly more than after the terrorist attacks in the USA on September 11, 2001, which has been considered the biggest news event of the 21st century so far. 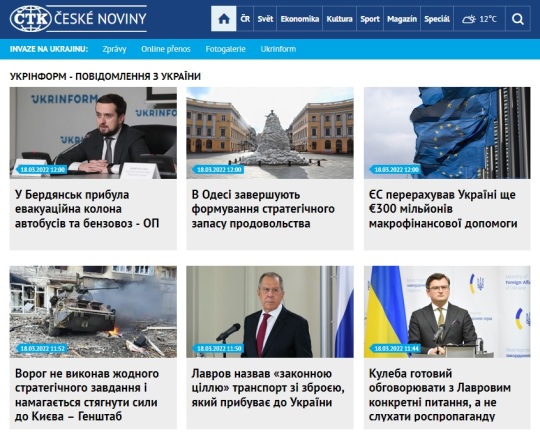 Since the outbreak of the conflict, the ČTK has prepared a special offer of news coverage of the war in Ukraine for its media clients. It has made available free of charge its online transmissions that are created from the issued headlines and currently run on about forty web portals in the Czech Republic and Slovakia. Clients can also receive the fastest coverage of Ukraine, the "headlines", directly to their emails. This has been used, for example, by deputies and senators of the Czech Parliament. The Ministry of Foreign Affairs uses the fastest news service in the form of text messages for its senior staff.

"We are in constant contact with our colleagues from Ukrinform, both directly and through the European Alliance of News Agencies (EANA). They are in a very difficult situation, so we want to help them," said ČTK spokeswoman Martina Vašíčková. Other European agencies are also helping Ukrinform, she added.

The Ukrinform news agency was founded in 1918, the same year as the ČTK. It has undergone a series of reorganisations in its history. In the Soviet period, it was merged with the Telegraph Agency of the Soviet Union (TASS). It became Ukraine's national news agency again in 1990. It currently publishes about 500 news items per day in English, German, Russian and Ukrainian, as well as about 200 photographs and sound recordings.

Visitor numbers at the news portal Ceskenoviny.cz, which is run by the ČTK and on which the ČTK publishes a sample of its production, have increased by 200 percent since the beginning of the war. The conflict in Ukraine and the related refugee crisis are currently the main topics on the website. Ceske noviny.cz is one of the most visited news websites in the Czech Republic.